Firmware/software: I don’t use any library at all. Not even the HAL libraries. I write my own source code for everything, optimized for speed. I use DMA for everything I can (SPI/UART/etc). I routinely use a logic analyzer to check that everything does what I want, and to trim for speed. All that works fine.

I have read the SX1276/77/78/79 datasheet (Rev. 7 - May 2020) many times, so I am fairly familiar with most of the SX1276 registers, the way the transceiver works (especially the LoRa modem option), the state machines to receive and to transmit, etc.

I have noticed a very curious behavior. I’ll try to describe it, using two similar tests:

Board R: It sends a packet every T seconds. T is clearly longer than the packet duration. Each payload has a sequence (SEQ) field. That SEQ field is incremented on each packet sent. Each payload also includes a CRC16 field (in addition to the CRC16 managed by the LoRa modem). My CRC16 field is initialized with a certain seed that is unique to me. That means that I only process packets that for sure belong to me. Board R never listens. It only sends packets.

If, as I say in this Test 1, I keep board L always in RXCONTINUOUS mode, it loses almost zero packets. It depends on the conditions, and how much interference there is during the experiment, but I recorded zero packets lost out of 9680 packets sent, which is very good.

Board R: Doing exactly the same as in Test 1.

Board L: Not always in RXCONTINUOUS mode. Every time it receives a packet, I make it leave RXCONTINUOUS mode, go to STDBY mode, stay there for 20 ms, and then go back to RXCONTINUOUS mode (the reason why I am doing this is that this is just an intermediate step, to make board L to acknowledge the packets received from R). Clearly (as you can see in the pictures), board L is already in RXCONTINUOUS mode before board R sends out the following packet. Board R sends a packet while “R mode” is “3h”.
Mode 0h = SLEEP
Mode 1h = STDBY
Mode 3h = TX
Mode 5h = RXCONTINUOUS
The mode output lines are updated not only every 10 ms, but also every time I (on purpose) change the mode. 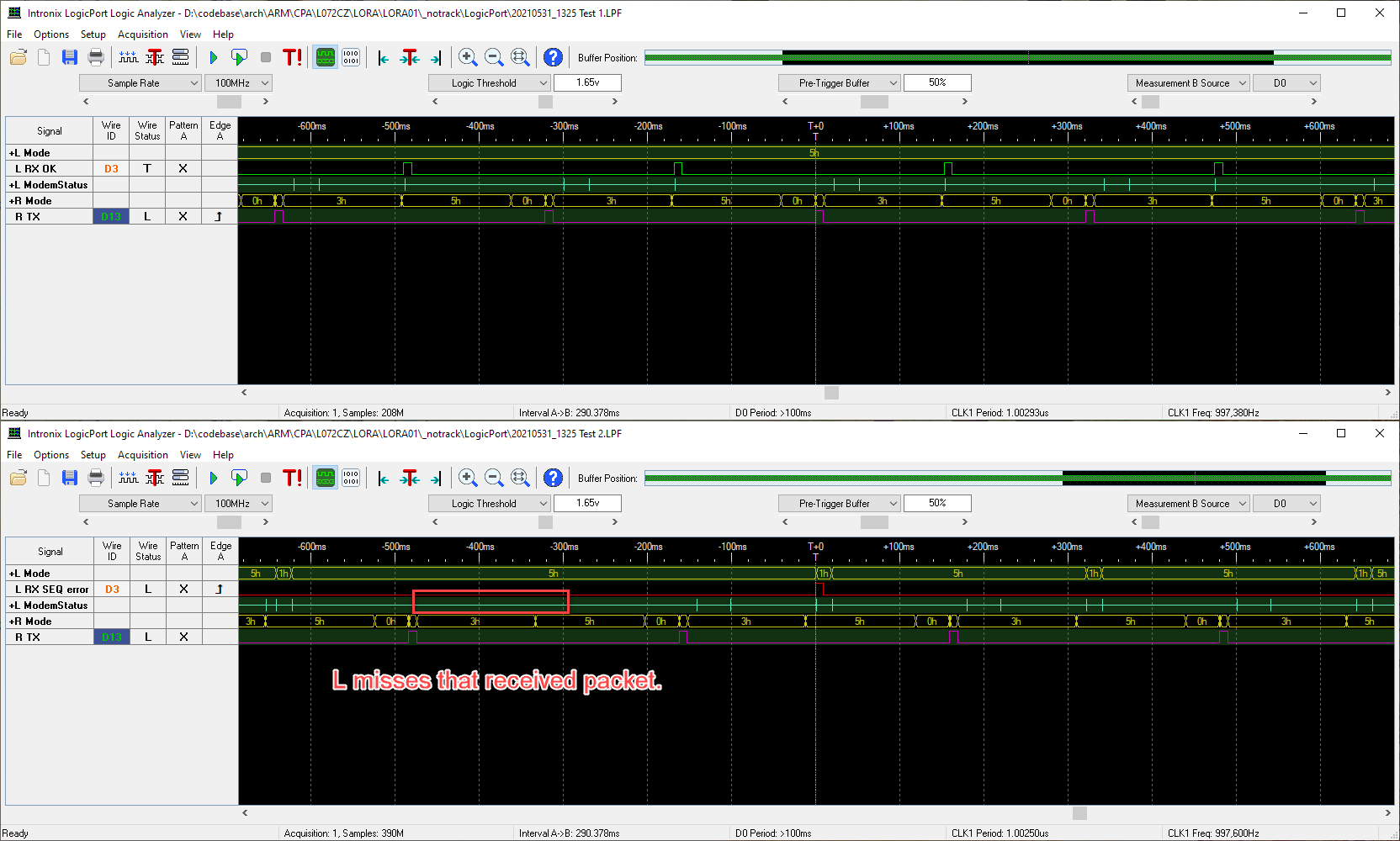 The curious thing is that, doing this, board L loses MANY more packets than in Test 1. It loses one in about 100 packets (than number being very very variable) sent by board R. The performance is way way worse than in Test 1. However, the distance between the boards, the output power, and the whole configuration of each one of the transceivers is exactly the same. The only thing that spoils the very low missed packet rate is bringing the receiver out of RXCONTINUOUS, keeping it in STDBY for any amount of time, and putting it again in RXCONTINUOUS mode (before the next packet arrives).

I have checked, and re-checked, and played with every single piece of configuration (AFC, AGC, output power, preamble length, coding rate, CrcAutoClearOff, DcFree method, PreamblePolarity, AutoRestartRxMode, PreambleDetectorTol, AfcAutoClearOn, RestartRxOnCollision, RxTrigger…), devoting several days into this, and I have been unable to get “zero packets lost out of 9680 packets sent” making the receiver temporarily leave the RXCONTINUOUS mode.

Does anyone know why this could be happening?

Some part of the internal state machine of the LoRa receiver of the SX1276 does NOT like being “restarted”, contrary to what it would seem, which is sad, because I need to acknowledge packets. I am tempted to say there is a design flaw, and even say that it is a silly one, but I can’t assure. The errata sheet does not say anything.